You are traveling through another dimension, a dimension not only of sight and sound but of mind. A journey into a wondrous land of commercial imagination. You are about to enter...the Super Bowl Commercial zone.

It's a world where creativity is currency, imagination is the obnoxious federal government, brands are celebrities, and commercials entertain more than the fourth-quarter of the actual game. Or, they completely bomb. The description of this commercial (which will not be revealed until game day, of course) struck me as particularly entertaining.

It's Wheat Thins. And you'll fight off Himalayan Yeti's to protect them. 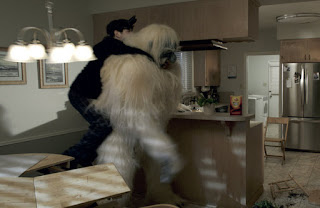 It is nighttime, and as (a man) puts a contraption on his head, his wife, also in pajamas, enters the kitchen and asks what he is doing.

“Using night-vision goggles to keep an eye on my Spicy Buffalo Wheat Thins and make sure nobody touches them,” he says.
“Who’s going to take your Wheat Thins?” she says.
“Um, I don’t know,” he says, “an intruder, the dog, Bigfoot, Ted from next door.”
She turns off the light and the screen goes dark. There is the sound of a struggle in the kitchen and she turns on the light to reveal her husband clinging to the shoulders of an abominable snowman.
“Honey, I was close, it’s a yeti!” he shouts, as their neighbor runs into the kitchen and steals the Wheat Thins.