Are there boundaries in entertainment anymore? And, if so, what are they? 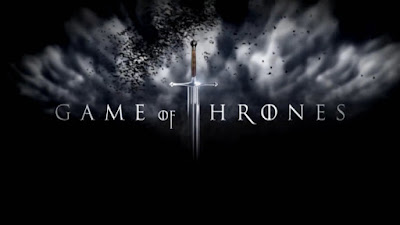 Today, I had a long Twitter exchange - which I never do - with a journalist and Christian about #GameofThrones. He defended the indefensible because, dude, it's really good tv.

I mean, what's a show without rape as a frequent, common, and accepted plot event? Throw in some sexual abuse of children, too. That's just necessary story development. Don't forget to include scenes of pregnant women being stabbed in the belly and women killed by shooting arrows into their groin. It's been two minutes, cue another rape scene.

I know talking about our entertainment choices is a sensitive topic. Entertainment is sacred. If you can find a show with good acting and an intriguing storyline, we'll tolerate nearly anything to have it.

But we've gone too far with this. And, if we don't speak up, hard as it is to imagine, it's only going to get worse.

I'm sharing the Twitter exchange to illustrate the lengths #GameofThrones viewers will go to justify their entertainment. If you're so attached to a program that you believe violent sexual assault on anyone for any reason at any time is a "necessary visual," you've got a serious stronghold in your life.

Turn off the tv, get away from that show, and get some perspective before it does more damage to your perception than it has already done. Being okay with consuming this kind of evil is not trivial and never okay.

Yes. Calling this stuff out will get me called "self-righteous" and "judgmental" and "holier than though." If that's what it takes to push back against this kind of vileness, so be it. I've been called worse. 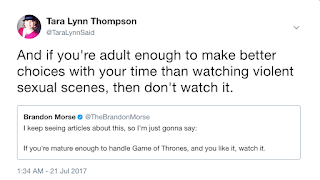 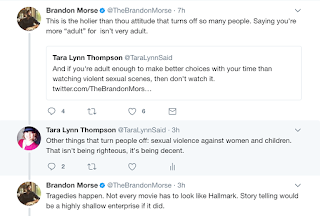 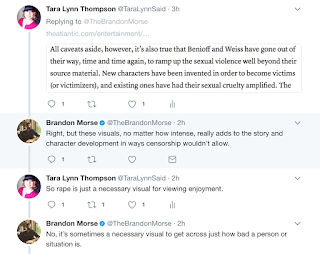 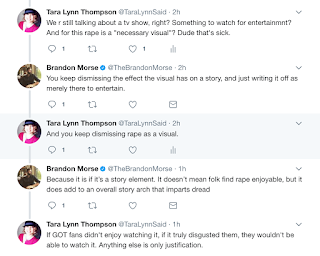 Any story that relies on sexual violence is a pathetic excuse for a story. And created by unimaginative writers. Building rich characters, even villains, requires far more than showing the vulgarity of their actions. That's the cheap route. David Benioff and D.B. Weiss, the writers, should try harder. But, instead, they are focused only on shock value of the subject.

A story in The Atlantic, the one I quoted above, outlines several ways the writers have gone far beyond what was required for the story or the character in their illustration of sexual violence. They've purposely added even more than the book series outlined and all for what purpose?

In the end, if sexual violence against women and children is acceptable in the name of entertainment, what isn't? If that doesn't stop you from watching a show, what will?

For you Game of Thrones fans, I'd really love an answer.
Posted by Tara Lynn Thompson at 1:15 PM No comments: Links to this post

Entertainment at the cost of what?


Years ago, a friend recommended, "The Ring." I watched it, then spent a week of insomnia waiting for a dead girl to crawl out of my TV.
I'm not glad I freaked out for a week, but, then again, I am. It forced me to seriously rethink my entertainment choices and their impact on my thoughts, views, and peace.
What I've discovered is that the more distance I put between myself and the glorification of sex, death, and gore, the more I see how it impacts me when it crosses my path again. I'm not only generally disturbed, I'm angry. So, I shut off my tv. Then I yell at it. And it soothes my rage.
If we think our entertainment is harmless and has no impact for good or bad, we've swallowed a lie. And if we think, 'oh, it doesn't bother me,' we've washed down that lie with personal deception. We're either lying to others or ourselves because, yes, it does affect you. If you aren't noticing it, that means you've allowed it to root itself in who you are. It means it's affected you far more than what you even realize. It means you need to start noticing now and fast.
The environment, the words, and, yes, the entertainment we surrounded ourselves with impacts how we view our life, our beliefs, our world, and even our personality. Whether unconsciously or not, we often take on characteristics and mannerisms of the characters - or reality stars - we watch. This is how movie one-liners become part of our cultural dialect.
Entertainment also puts thoughts in our heads that simply should not be there, especially as a Christ-devoted example to our friends, coworkers, and family. Christ is holy. Above all else. Holy. What are we saying about our love of God to those around us who witness us easily discard that principle for a good time?
What I'm saying is, our entertainment choices matter. Really, really matter.
I'm not telling you to resort to watching reruns of "Little House on the Prairie," although a few episodes of that show wouldn't hurt anyone. And I'm definitely not saying I've got the list of "approved" and "banned" TV shows and movies to pass around. But I do believe we should be considering what we're consuming before pushing play. And we should be willing to turn it off for moral reasons, not just entertainment value ones.

Posted by Tara Lynn Thompson at 5:20 PM No comments: Links to this post