When you're in the desert, don't drink the Kool-Aid. 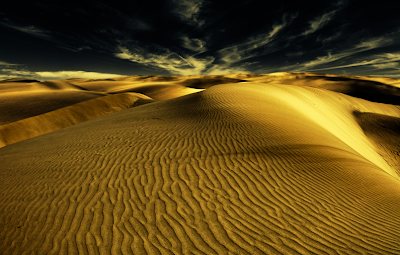 I wanted an aisle or window or middle seat. I wanted to be cramped and stuck sitting between two severely big-boned women. Or men. I wanted a little turbulence, a harrowing trip to the bathroom, a magazine selling gadgets to flip through, a child crying somewhere in the vicinity, a stewardess who smiled despite her furrowed brow, and a tiny plastic cup with exactly two ice cubes and slightly chilled water to keep me pacified for six to eight hours.

Around 10 am that morning, I had made the decision. Forget this life. Let's try another. So I checked that day's available flights, did a mental inventory of clean clothes, and started making plans.

By sundown - Alaska. There, I'd start fresh with several hundred dollars less than when I woke up.

Freedom! Spontaneity! I'd chuck this writing gig and learn deep-sea fishing. Or pipelining. Or shopkeeping. Or lounge singing. Or selling souvenirs to people in the Lower 48 who came to God's country seeking an escape.

I wanted on that flight. I wanted that life. I was even willing to pay a ridiculous price tag if it meant leaving before sunset. But, obviously, I didn't go. A friend talked me off the tarmac with a blunt observation, "You're in the desert," he said. "And, yes, it's hard."

Heck yeah it is. There's nothing in the desert but dried dirt. And a few cacti. Maybe a snake.

It's the place of lowlands and low expectations, when trials stop having an end and take up permanent residence. It's where you give up anything will ever change. You accept that life is simply a disappointment. This is how it turned out and there's nothing to be done about it.

A few days earlier, a friend and I had been talking about my circumstances, all of which I'll spare you. After a discussion on fried apples and leadership principles, the two have connections you know not of, he said something that must be truth because it resonated with me as if my mind had been replaced with a tuning fork and struck against a wall:

Your family, your friends, me...we all wish we could short-circuit this in some way.  To rescue you and to hand you a satchel with all of the answers.  But then, you would not become the person you are supposed to be, the writer who moves multitudes, a woman of destiny.


You mean, all of this pain has a purpose? You sure? I just thought everything kind of sucked right now and that's just life. I figured my path had simply bottomed out in some kind of sinkhole. I'd made a mistake somewhere, chose the wrong toothpaste brand, veered left when I should have pivoted right, signed a two-year contract with Sprint when I should have gone with prepaid Boost.

Whatever I'd done, it was irreversible.

A few days later, while thinking about how much sun destiny requires, my friend threw the "desert" idea at me. Then he hammered it home. "When God uses someone for His purpose, He'll often take them to the desert first." Like Jesus. Or Moses. John got to know the nightlife on the Island of Patmos pretty well. Abraham became a card-carrying member of the God Relocation Program, too.

Being in a place of life, or even a physical place, where you are completely out of your element, isolated and overwhelmed, over your head and under pressure, is how God gets our attention. Here is where we hear Him best, even when we can’t hear Him at all. This is the moment we trust, when all around us is blistering sand. Now is when we stand still and believe, the most demanding physical strain we may ever endure.

I don’t have this desert living figured out. That Alaska idea was only a week ago. The fact I’ve made it nearly a full seven days without running for the border is progress. Tomorrow I may gaze into the north and sway in that direction. But, for now, today, I’m taking it one moment first. Then another after that. I’m ignoring the hopelessness shimmering on the horizon because hopelessness is a mirage. I’m waiting and trusting and hoping and taking lots of deep breaths.

If you’re there, wondering around the desert, too, let’s meet up when we get out of this place because we will get out. We’ll have a couple of those frozen fruity drinks with umbrellas and compare tan lines.

Posted by Tara Lynn Thompson at 12:19 PM No comments: Links to this post