"We are fast approaching the stage of the ultimate inversion: the stage where the government is free to do anything it pleases, while the citizens may act only by permission; which is the stage of the darkest periods of human history, the stage of rule by brute force."

I can't help but smile.
Posted by Tara Lynn Thompson at 4:34 PM 1 comment: Links to this post

Americans are, by extensive majority, pro-life. Gallup just released the poll last week, showing a dramatic increase and change in culture.
See for yourself. 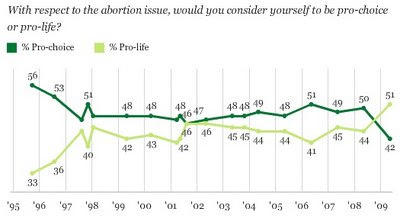 Here is a powerfully animated speech given by Theologian John Piper in January, a reaction to a President who believes children are burdens, not blessings. And willfully supports infanticide.

He's not really concerned with limiting abortions. In fact, he wants your tax dollars to pay for them, he made that clear today.

Washington, DC (LifeNews.com) -- President Barack Obama's new federal budget calls for taxpayer funded abortions in the nation's capital. Although Obama has promised Americans he wants to reduce the number of abortions, one pro-life group says he is violating that promise by calling for taxpayer-financed abortions in the District of Columbia.

Is there anything he doesn't want tax dollars to pay for?
Posted by Tara Lynn Thompson at 1:56 PM No comments: Links to this post