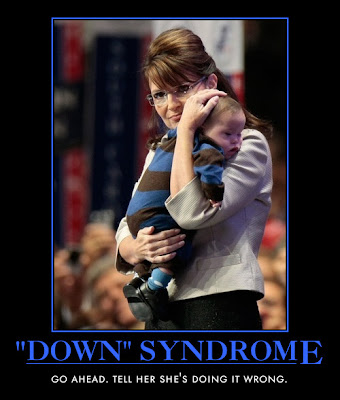 Thanks Bob Parks at Black-and-Right.com
Posted by Tara Lynn Thompson at 1:37 AM No comments: Links to this post

Posted by Tara Lynn Thompson at 12:02 AM No comments: Links to this post 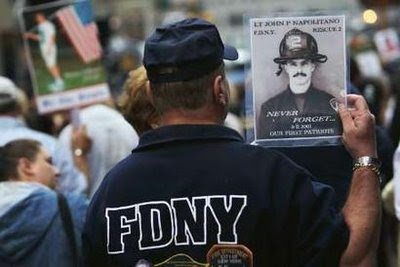 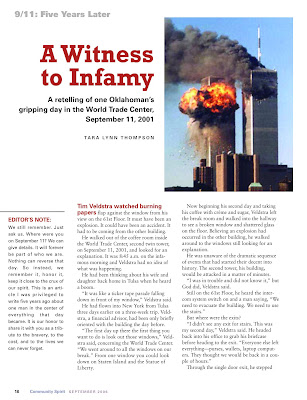 A WITNESS to INFAMY

Tim Veldstra watched burning papers flap against the window from his view on the 61st Floor. It must have been an explosion. It could have been an accident. It had to be coming from the other building.
He walked out of the coffee room inside the World Trade Center, second twin tower, on September 11, 2001, and looked for an explanation. It was 8:45 a.m. on the infamous morning and Veldstra had no idea of what was happening.
He had been thinking about his wife and daughter back home in Tulsa when he heard a boom.
"It was like a ticker tape parade falling down in front of my window," Veldstra said.
He had flown into New York from Tulsa three days earlier on a three-week trip. Veldstra, a financial adviser, had been only briefly oriented with the building the day before.
"The first day up there the first thing you want to do is look out those windows," Veldstra said, concerning the World Trade Center. "We went around to all the windows on our break." From one window you could look down on Staten Island and the Statue of Liberty.
Now beginning his second day and taking his coffee with creme and sugar, Veldstra left the break room and walked into the hallway to see a broken window and shattered glass on the floor. Believing an explosion had occurred in the other building, he walked around to the windows still looking for an explanation.
He was unaware of the dramatic sequence of events that had started their decent into history. The second tower, his building, would be attacked in a matter of minutes.
"I was in trouble and did not know it," but God did, Veldstra said.
Still on the 61st Floor, he heard the intercom system switch on and a man saying, "We need to evacuate the building. We need to use the stairs."
But where were the exits? 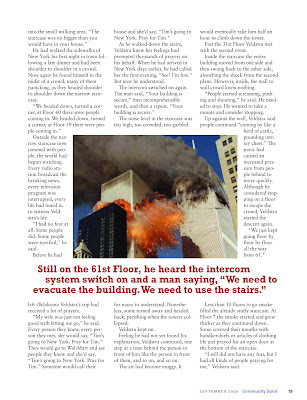 "I didn't see any exit for stairs, This was my second day," Veldstra said. He headed back into his office to grab his briefcase before heading to the exit. "Everyone else left everything - purses, wallets, laptop computers. They thought we would be back in a couple of hours."
Through the single door exit, he stepped into the small walking area.
"The staircase was no bigger than you would have in your house."
He had walked the sidewalks of New York his first night in town following a late dinner and had been shoulder to shoulder in a crowd. Now again he found himself in the midst of a crowd, many of them panicking, as they headed shoulder to shoulder down the narrow staircase.
"We headed down, turned a corner, at Floor 60 there were people coming in. We headed down, turned a corner, at Floor 59 there were people coming in."
Outside the narrow staircase now jammed with people, the world had begun watching. Every radio station broadcast the breaking news, every television program was interrupted, every life had tuned in to witness Veldstra's life.
"I had no fear at all. Some people did. Some people were terrified," he said.
Before he had left Oklahoma, Veldstra's trip had received a lot of prayers.
"My wife was just not feeling good with letting me go," he said. Every person they knew, every person they met, she would say, "Tim's going to New York. Pray for Tim." They would go to Wal-Mart and see people they knew and she'd say, "Tim's going to New York. Pray for Tim." Someone would call their house and she'd say, "Tim's going to New York. Pray for Tim."
As he walked down the stairs, Veldstra knew her feelings had prompted thousands of prayers on his behalf. When he had arrived in New York days earlier, he had called her the first evening, "See? I'm fine."
But now he understood.
The intercom switched on again. The man said, "Your building is secure," then incomprehensible words, and then a repeat, "Your building is secure."
The noise level in the staircase was too high, too crowded, too garbled for many to understand. Nonetheless, some turned away and headed back, perishing when the tower collapsed.
Veldstra kept on.
Feeling he had not yet found his explanation, Veldstra continued, one step at a time behind the person in front of him like the person in front of them, and so on, and so on.
The air had become muggy. It would eventually take him half an hour to climb down the tower.
Past the 31st Floor, Veldstra met with the second event.
Inside the staircase, the entire building moved from one side and then swing back to the other side, absorbing the shock from the second plane. However, inside, the wall to wall crowd knew nothing.
"People started screaming, pushing and shouting," he said. He needed to stop. he wanted to take a minute and consider stopping.
Up against the wall, Veldstra said people continued "coming by like a herd of cattle, pounding into my chest."
The panic had caused an increased pressure from people behind to move quickly. Although he considered stopping on a floor to escape the crowd, Veldstra started the descent again.
"We just kept going floor by floor by floor all the way from 61."

Less than 10 floors to go, smoke filled the already stuffy staircase. At Floor Seven, the smoke started and grew thicker as they continued down. Some covered their mouths with handkerchiefs or articles of clothing. He just prayed for an open door at the bottom of the staircase.
"I still did not have any fear, but I had all kinds of people praying for me," Veldstra said.
In the lobby, he was directed by security, firefighters, and police officers to head through the mall instead of exit out the front where feet of debris had been piled.
Now blocks away, the crowd was no longer pressed to keep moving.
Meeting up with fellow co-workers from Oklahoma, Veldstra and the group headed toward the hotel as he glanced up at the holes in the building, still unaware of what had caused it. Walking away, he heard a woman scream and turned around once more.
"There was something falling and I did not even know what it was," he said.
Then he comprehended. People were jumping out of the building.
"Seeing those people fall is the most sickening feeling. They fell so long," Veldstra said.
The seriousness of the situation met him at Ground Zero.
Although he would soon understand, Veldstra said he found it difficult to absorb the idea the situation had been hopeless for these people, so dire was the circumstance they leaped out the windows with no hope for survival.
A mile away, Veldstra and the Oklahoma group walked from behind several buildings to get their last chance at seeing the towers, but they had disappeared. The landmarks were gone, vacating the New York skyline.
"The first thing I see from the television in (my hotel) lobby is the plane flying into the building."
Now he had his explanation. now he knew what the rest of the world knew. He had escaped, thousands had not.
Veldstra said his experience is his testimony of God's goodness, a testimony he tells frequently since that day, a testimony he'll tell until his last day. 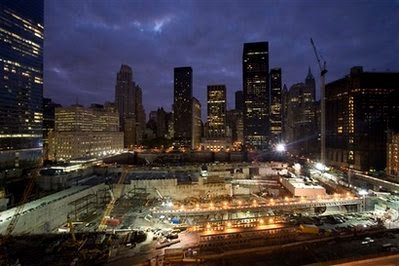 The World Trade Center site is shown Thursday, Sept. 11, 2008 in New York on the seventh anniversary of the attacks on the World Trade Center. Presidential candidates Sen. John McCain (R-Ariz) and Sen. Barack Obama (D-Ill) are scheduled to visit the site Thursday.
(AP Photo/Mark Lennihan)
Posted by Tara Lynn Thompson at 11:59 PM No comments: Links to this post


Posted by Tara Lynn Thompson at 2:42 PM No comments: Links to this post

You probably don't know the name of Michael Monsoor.

Here is a video tribute played during the Republican National Convention about Michael, a Medal of Honor recipient. Why don't you know him? Because our country's mainstream media, AMERICAN media, would rather spout statistics and rantings about the war, instead of praise the men and women in it.
So in St. Paul, Minnesota, inside the Xcel Center at the RNC, thousands sat and learned his name, while outside, protesters have attacked Republican delegates with poison, attacked their buses (while in route) with cement bags tossed over bridge overpasses, and broken windows in "peace" marches.

And act under the guise and abuse of their freedom, a freedom handed to them by Michael Monsoor.