Boxed in? Box your way out. 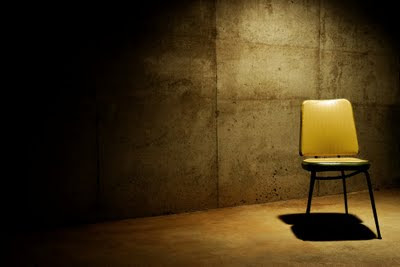 He "strode defiantly" past the protesters.

Did Dominique Strauss-Kahn walk? No, he strode. Did he curve his neck downward with contriteness until his forehead greeted the pavement ahead? Not unless he's double jointed. Or remorseful. I doubt both.

No, he strode defiantly.

What Strauss-Kahn did was walk with defiance and whatever physical attributes that entails - a level head, a sweatless brow, eyes that connect and linger with others. That's what we can guess by the reporter's description of his shame stride into court this week. It's not a poor choice of words. Most likely, not even inaccurate.

That's how I would describe most news writing - safe. Or dull. (Po'tae'ta, Po'tata)

In 1996, when I entered the reporting business, the time spent avoiding the words you COULDN'T use took more time than using the words you COULD. Anything frivolous or lacy, anything with a curve or a color, a word that bent a little on the ends and flared in the middle, a description not summed up in two words, was simply not done.

I know this because I tried it. And was clearly instructed never to do it again.

When you wrote news, you wrote according to a format. Even according to a rhythm. We were punching out the equivalent of the monotone broadcast anchor, the timber of their voice raising and lowering on cue.

We couldn't speak with boredom. So we wrote it.

That was my second experience of having my writing and creativity boxed in. English class was my first.

Dry reporting is probably assumed to be classic. Old school. Born of generations of newspaper men. This is the way men did it back in the day. (Hitch up belt. Spit something out side of mouth.)

That's a bit of a misnomer. In my pre-Internet days as a reporter, I toiled and fidgeted in the badly lit back room of my local library, while going through reams of microfiche from 1901 and on. Take it from me, reporting in the beginning came in technicolor narration.

No wonder newspapers use to make a profit.

Reading the news then was an experience of the senses, even the ones you want to forget. You heard the heated words, dabbed at the perspiration, smelled the gun powder, and eyed the library trash can after discovering a decomposing corpse.

Old school journalism was storytelling at it's most intricate and alive. You breathed the surroundings in, even if - had you really been there - you would have been holding your nose.

Too often our stories don't reek or rile, don't whirl and spin, don't cling like fog to our pores or metal to our mouths. They don't engage our senses. We can peruse them so quickly they barely engage our minds.

Now, international politicians accused of sexual assault are reported to have "strode defiantly",
- not with an obstinate push to their feet as if warring against a crushing gale of negative opinion
- not with the stoic expression of a bloodthirsty matador snapping his cape in provocation
- not with the silent roar of a salivating carnal creature refusing capture
- not void of perspiration over the brow, on the lip, or under the arm
- not as determined as death.

Whatever description fits. Whatever takes the reader along. Whatever has us rushing to find library trash cans. Whatever.

I'm not saying boxes are always bad. They're great to store old trophies and move things. In writing, a short duration can even teach a writer how to follow rules, how to focus, how to streamline, how to summarize, and how to beat against a table with your left hand while typing with your right.

All boxes, however, need exit doors with ergonomic knobs. If you are trapped inside one, break down the door. Throw in a description that draws the reader in, teases them in the ribs, tickles their ears, and throws them off their scanning stride. Don't be afraid to create a scene that tilts their head or bites their tongue.

Reading was never meant to be safe.
Posted by Tara Lynn Thompson at 2:18 PM