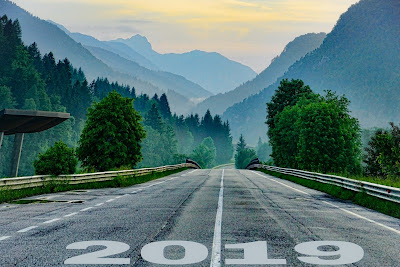 Place your bets. We're less than a week into 2019 and I'm already getting into my new hobby: making predictions based on nothing other than my 'think so's that are still destined to come true. (Some people knit; I prophesy.)

1. The person who believes they know all the answers actually does.
Is this person Jesus? If not, then...

3. The groups and individuals throwing public tantrums will chill.
It's a post legalized marijuana world, but this still won't happen.

4. Navel gazing and self-analysis will plummet in popularity.
Personally speaking, all I need to know about me is that Me is a fluid concept.

5. Moisturizers will start absorbing quickly.
The skin isn't slurping coconut oil any faster than it always has no matter what the packaging says.

6. Scientists will finally agree they never all agree on anything.
Bless their contradicting hearts.

7. We see ourselves for who we really are.
We usually thinker higher, as well as lower, about ourselves than what is accurate.

8. The word "authentic" will be used sparingly.
Some concepts should only be lived out, not spoken.

9. The new Tom Ford signature scent will be broccoli.
There are so many things your green veggies can do. This isn't one of them.

10. Life does a total body makeover and becomes easy.
Life isn't supposed to be easy. Stop asking her to be something she's not.

11. People die the moment they hear an opposing viewpoint.
They may "act" like they're dying, but it's a false alarm.

12. Worrying starts showing promising results.
When we're living without God, we have good reason to panic. When we live with Him, we have reason to rest.

14. The concept of a passing lane for faster traffic is finally understood.
It isn't E=mc², but it's apparently still a head-scratcher.

15. Marine biologists prove there aren't plenty of fish in the sea.
There are, actually. So order them baked, grilled, steamed, or blackened. (Oh, you thought I was talking about something else?)

16. Happiness is finally achieved by getting everything we want.
Wanting is like a CVS receipt. There is no end.

17. Hard work produces no positive results.
Don't believe this anti-prediction? Work hard for something and get back to me.

18. Pollsters, pundits, and bloggers, such as myself, realize our opinions are worthless and we finally shut up.
Silence is golden, but I'm more of a sterling silver kind of girl.